I’m hoping to be able to reproduce a number of positions and games from the 40 or so games played by Suffolk players at the 4NCL last weekend.   The major difference between 4NCL games and the average league game is the time control.   In the 4NCL you get 100 mins for the first 40 moves, followed by a further 50 minutes for the next 20 moves.   In addition, you receive 30 seconds increment from the first move.   That makes the time control equivalent to last year’s, when it was 40 in 2 hours plus 20 in 1 hour.   The great advantage of this ‘Fischer’ style time control is that there can never be a draw claim under the infamous ‘10.2’ rule.   On the other hand, games can in theory go on for ever…

Saturday was a case in point in my own game, as White against Leo Tsoi (Warwickshire Select).   After my 76th move (h7) and nearly six and a half hours play, the following position was reached: 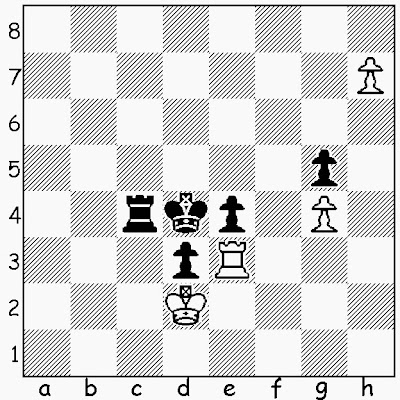 The game continued for a few more minutes, by which time it was the last to finish.   And it ended in a draw!