It’s not easy being a team captain.   Not only do you need to find 16 players for a full team, but then you have to play your own games at the same time as keeping a watchful eye on the progress of the rest of your team.   Full credit, then, to Ian Wallis for winning both his games last Sunday!

He reached the following position in his second game, against David Martinez Villena (173) of Bedfordshire (White to play): 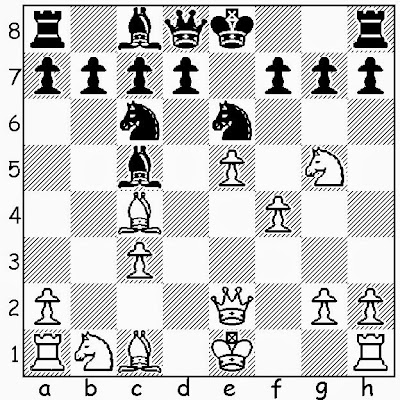 11. Nxf7?!   Kxf7   12. f5.   Looks dangerous and the complications are immense.   However I have not done anything wrong in the preceding play so I tried to convince myself that everything would be OK.   The difficulty was finding the right path.

17. Qg3   (17.   Bxd8   Nxg4 with two pawns to the good was my expected continuation but White didn’t fancy this.   His continuation was less challenging).