After five rounds of the Gibraltar Masters, Suffolk’s David Spence is on three points, the same score as GMs Nigel Short and Stephen Gordon, and just 1½ points behind the joint leaders.

After an excellent draw in Round 1 against a 2614-rated GM, David lost to another GM in Round 2, followed by a surprising draw against a 1941.   But since then he has won his next two games, with today’s in Round 5 being his best result to date, beating a 2419-rated FM.

To date David has gained 15 rating points, which would take his ‘live’ rating to 2231.

The other East Anglian Player, Ashley Stewart from Cambridge, is on 2½ points, with a similar rating improvement of 15 points.

One of the best moves seen so far occurred in the first round when GM Gata Kamsky was Black (to play): 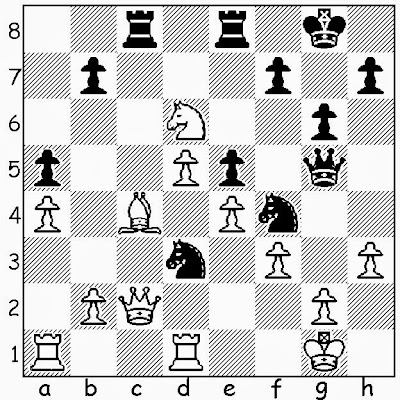 Black now threatens mate in one along the g-file, so White has to weaken his kingside further.   Either capture of the knight would end in instant disaster with the loss of White’s queen.