Back in January, at the Under 160 match between Cambridgeshire and Suffolk, one game featured the Chairman of the Bury Area League, Ole Bay-Petersen and the President of the Suffolk League, Colin Roberts.   These two have different job titles, but in effect they both do the same job in the two leagues.

Their game was an interesting one, which both players have kindly annotated in some detail.   Most of the text is Ole’s, but the text in red is Colin’s.

“Since I retired and returned to chess ten years ago, I’ve probably played fewer than a dozen games against Colin, but I’ve enjoyed them all – even those I lost – as Colin is a highly enterprising and uncompromising player.   If memory serves, we haven’t drawn a single game with each other.   A few years ago, after a long and exhausting battle, my draw offer was promptly rejected by Colin (who then went on to lose).   “I play to win” was the motto of my illustrious compatriot Bent Larsen.   It may well be Colin’s motto, too!

Although our game at Newmarket was flawed, it was very tense and exciting.   I know Colin to be a Slavophile, so it was no surprise when the opening turned into the complex and super-sharp Botvinnik variation in the Semi-Slav.   This is of course a fashionable and heavily analysed variation, and the first half of the game, as it turned out, consisted of “book” moves.   This wasn’t actually a result of home preparation (neither of us knew we would be playing one another), and – as far as I can recall – I haven’t played the Botvinnik variation with either colour in a serious game since I was young (and that was some time ago).   Naturally, I’ve played over many GM games with that variation, and some of the lines must have lodged themselves somewhere in my memory cells.”

“I, too, have enjoyed my games against Ole.   I think there have been nearer half a dozen than a dozen, but all have been hard-fought.   Ole is a tough and very courteous opponent.

The Botvinnik Variation of the Semi-Slav was once described by Anatoly Karpov as “one of the sharpest and most fascinating variations in opening theory” and it always provides exciting, unbalanced games.   I agree generally with Ole’s analysis and I have not duplicated his comments but rather added my thought to his.”

But the Mainline Botvinnik is much more fun!

I find it hard to believe that the 9… Nd5 line can be at all sound.

And we have transposed to the mainline.

15… b4   (The tension mounts.   Black obviously has full compensation for the pawn deficit, and his pawn avalanche on the queenside looks alarming).

Again, this move is the mainline according to Sadler. 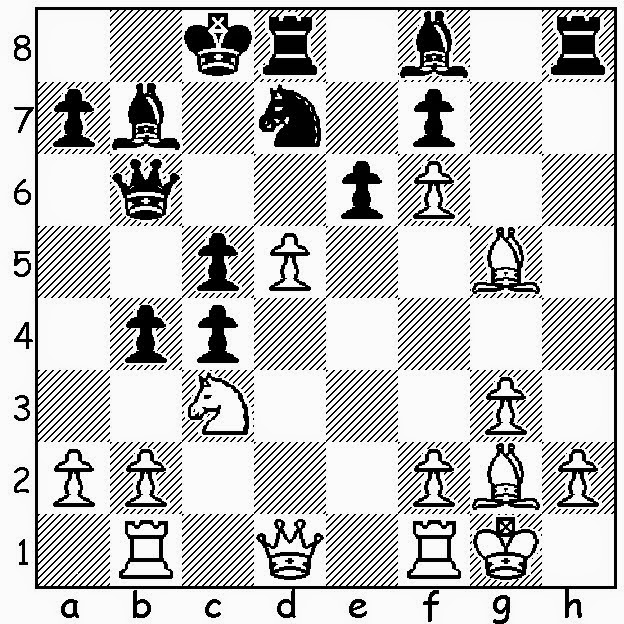 16. Na4 is more usual.   Rb1 was played by Topalov against Kramnik in Dortmund in 1996.   I had not played this line for some time and I knew that taking the knight was dangerous, but I wanted to reconvince myself just how dangerous it was!   Kramnik rejected the sacrifice, too.

I don’t know whether Ole is being excessively kind to this move.   I had the same thoughts as he when playing it.   Ive not seen it written about though, which gives me doubts.

17.   Qe2   Nd3   (renewing the threat of capturing on d5/c3, and parking a monstrous knight – or ‘octopus’, as GM Keene calls it – on an ideal square (Steinitz compared a protected knight on the 6th rank to a rusty nail in the opponent’s knee!).

Strange analogy.   Steinitz was a little unusual but why a rusty nail and why the knee?   Taking the knight looks equally dangerous to me.   I was happy with the knight on d3 at this stage though.

I wanted to keep the queens on to maximise attacking chances (I am a pawn down, after all) and, as Ole implied in his introduction, I find it hard to do circumspect!   Perhaps this is partly why I have such a low proportion of drawn games.

… Rh7 at some stage was a thought, as was Rhd8 after the bishop moves, but I’m unconvinced about my move now. Perhaps I should not fear … Bd6, as if Nxd6 and I capture the knight, my own cavalry on d3 is perhaps a little harder to dislodge?

I agree that … Bh6 is poor.   … Bxg5 is not a good idea, whether White takes back with the knight or the pawn. 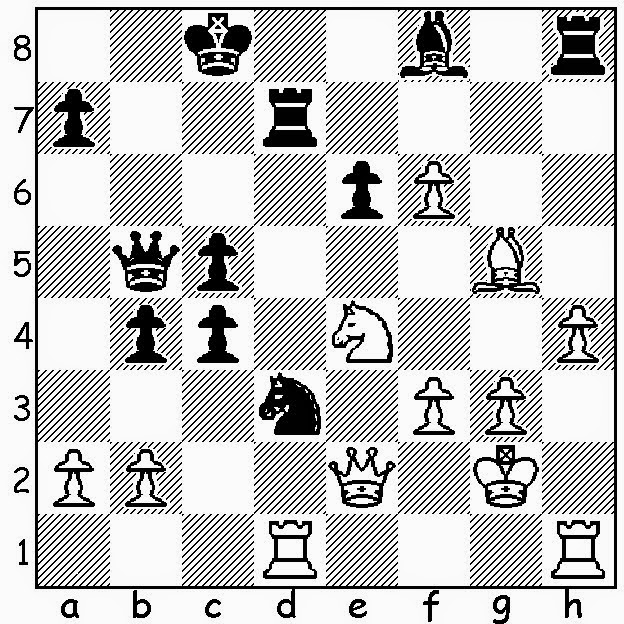 I think whereas Ole has continued to play well, my moves 21 to 24 were weak and the game has slipped away.   Hence it is hard to find a good move here.

25.   Rd2   Bh6   (a surprising, some might say stubborn, return of the hapless bishop.   Here I thought Colin was beginning to lose the thread of the game.   Afterwards I realised that this was actually part of a cunning plan to awaken his slumbering knight by tactical means).

That was the plan, but it is too late, I fear.   I think that ‘stubborn’ is unfair; I am just having difficulty getting my pieces moving now.

26.   Rhd1   Bxg5   27.   Nxg5   (attacking e6, and better than hxg5, which would allow Black to double rooks on the h-file).   27… Rxh4   (I must admit that this move came as a nasty shock.   I’d actually been very conscious of the danger of a fork on f4, and yet I completely overlooked the possibility of the rook sacrifice.   When I’d calmed down, I realised that Black’s move, though tactically alert, was based on a serious oversight).

It was more of a final attempt to bluff!   White is unstoppable now, of course.

“In the final position White has a plethora of passed pawns, and all his pieces are centralised, whereas the Black king’s rook is back where it came from, his queen’s rook is pinned, his queen – nestling among the pawns – is out of play, and the Black knight is still looking fine but doing nothing.

It’s ironic that the White knight, which remained en prise for several moves, ended up – via e4, g5, and f7 – on a square corresponding to that of the Black knight, but whereas the latter could only dream of delivering a family fork, the White knight succeeded in doing exactly that.

Despite mutual inaccuracies, I found this a satisfyingly complex and engrossing battle.   I think I might try the Botvinnik variation again, as either White or Black, if given the chance.   And I’m certainly looking forward to my next battle with Colin!”

“I always look forward to games with Ole as they are always fun and played in a totally sportsmanlike fashion.   In this game, perhaps I shaould have allowed the queens to come off after all, but then I might have faced a long and losing ending.

To the casual observer, this may not look a very good game; there is a lot of theory and then Black plays inaccurately and allows White, who plays far more sensibly, to win, but not before attempting a totally unsound sacrifice!   But it felt very different when we were playing and we both enjoyed the game.

I congratulate Ole and look forward to our next encounter over the board.”

One thought on “A Tale of Two Knights”