Rounds 7 and 8 took place this weekend at the Holiday Inn, Birmingham Airport, for Divisions 1 and 2.

The only Suffolk-based team in Division 2 is Anglian Avengers 1.   The methodology for determining promotion and relegation is complicated.   After Round 7, the 16-team Division splits into two sections: the Promotion Pool and the Relegation Pool.   The eight teams in each section carry forward results against the other teams, and then play rounds 8 to 11 inclusive against teams from within their own pool.

Anglian Avengers knew they would be in the relegation pool, so their match on Saturday, against Guildford 3, was effectively a ‘dead rubber’, as Guildford were already destined for the promotion pool.   This was just as well, as AA1 crashed to a 6 – 2 defeat.

Today, Anglian Avengers faced Wessex, whom they outgraded by more than 100 points per board.   The result was a complete reversal of Saturday, winning by the same scoreline.   Anglian Avengers now head their pool and are in little danger of being relegated.

In Division 1, the only Suffolk players in action this weekend were Alan Merry and Dagne Ciuksyte.   Both were unbeaten.   Alan drew with Australian GM David Smerdon on Saturday, and drew again today with English FM Isaac Sanders.   Dagne won yesterday against a lower-rated player, and had an excellent 82-move draw today, with the Black pieces, against former Suffolk Grandmaster Nick Pert.   The whole game can be viewed under ‘Live Games’ on the 4NCL website, but below is the position after Nick’s 70th move (Rc7 – e7).   It appears that Nick missed the line which followed: 70… d4+!   71. Kxd4   Nc6+   72. Ke3   Nxe7   73. fxe7   Rg1   74. Ba4   Re1+   75. Kd2   Rxe7.   Now Dagne is winning.   The game seems to have taken a strange turn on the final move (82. Bb3), which if it was played, actually loses for Nick.   But the game was drawn at this point, despite the move 82… Rh3+, which would have won outright for Dagne.   Perhaps we’ll hear more about this game from Dagne herself? 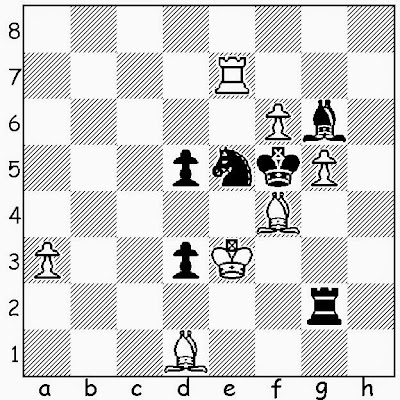