Alan Merry‘s experience of playing against his highest-ever rated opponent, Michael Adams, yesterday, in the Isle of Man Pokerstars tournament, ended in complete disaster.   Alan managed to make a horrendous blunder as early as move 7.

Players of club standard who play the Caro-Kann or the Scandinavian should be familiar with the trap involving White’s Qe2.   This not-so-subtle move pins Black’s e-pawn.   This was the position after White’s 7th move (Qe2): 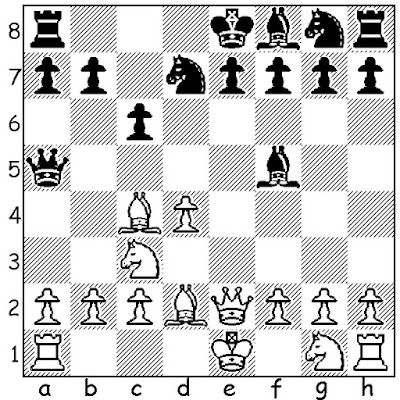 It’s essential that Black now retreats his queen to either b6 or c7.   Instead, Alan played the disastrous 7…Ngf6??   He could’ve resigned immediately after Adams’ next move:   8. Nb5!.   The queen is attacked and Nd6+ is threatened.   The queen can only go to b6, when Nd6+ wins everything.   Alan played on for a further 14 moves before resigning, but his position went from bad to terrible.

For us mere mortals, it’s somehow gratifying to see that an aspiring IM can make such an error.   But our sympathies must lie with Alan, who must be feeling awful after that game.   Today he has a chance to make amends, facing another GM in Round 6.

2 thoughts on “Disaster for Alan”