The nine-round Pokerstars Isle of Man International tournament concluded today, with Alan Merry top-scoring of the four Suffolk-based entrants.   Alan finished on 5/9, a tournament performance of 2518 and a gain of 41 rating points.   In fact, his rating improvement was the greatest of all 103 competitors.   This takes his ‘live’ rating to 2376, just 24 points short of a long-awaited IM title.   In this tournament Alan played five GMs, beating two and losing to three.

In his final game today, against Romanian IM Alina L’Ami (pictured right), Alan (Black) arrived at the following position.   Can you work out his next move?   (Answer below the diagram). 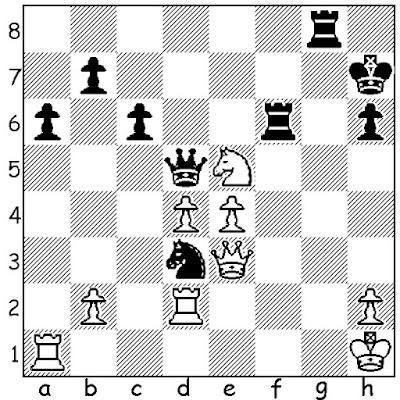 Justin Tan and Dagne Ciuksyte, both IMs already, finished on 4½ points, whilst the fourth Suffolk entrant, Ed Player, finished on 3½.