The European Team Championships concluded on Sunday, with England’s teams finishing 10th (Open) and 23rd (Women).   Both results were rather disappointing, as the teams had been seeded 5th and 18th respectively.

In the Open section, all except bottom board Gawain Jones under-performed, especially Luke McShane, whose performance of 2466 was more than 200 points below his current rating.   England finished with 11 points (four wins, three draws), whilst winners Russia scored 15 points (six wins and three draws).

In the Women‘s section, England’s top board Jovanka Houska played extremely well, scoring 7/8 to gain the silver medal for Board 1, with a performance of 2614.   Suffolk’s Dagne Ciuksyte had a disappointing event, losing her last two games against lower-rated opponents.   This was the position from her last-round game, where White (Dagne) is to play in a level position against her opponent from Azerbaijan.   Dagne erred with 39. Kxg2??   Instead 39. Rxe5 or Rd5 maintains equality.   After 39… Rd2! Dagne had no answer to the threats on f2. 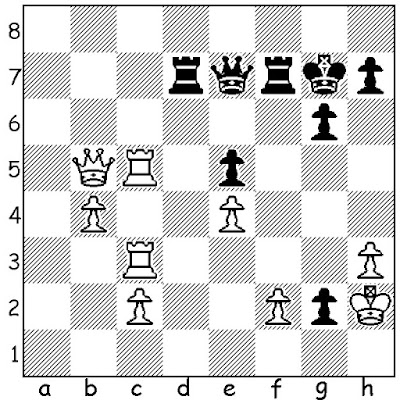