Peter Keffler, doyen of the Clacton Chess Club, passed away last Tuesday (22 December).   He had celebrated his 92nd birthday only a month earlier.

In his prime, Peter was a 200-grade player (or equivalent) and had several published games and positions.   His most famous win, and one that was celebrated on his 90th birthday cake, was in 1970 when he won with the Black pieces in just 15 moves, playing the Traxler Counterattack (see game below).

John Lambert has written the following: “When I arrived at Clacton Chess in the early nineties, Peter was the leading light.   His knowledge of chess was extensive, as was his generosity in passing on his skills to others.   He had studied at Oxford University and had many games published.   He was quoted in Harding & Barden’s ‘Openings for the Club Player’ for his thoughts on the Two Knights Defence.   If you have a copy, see page 22 (well worth a look).   Peter was influential to me (although starting late I never got near him) as well as juniors at the club in his attacking style of play which made him a match for any player in the Suffolk & Essex leagues.   Peter also played County Chess for Somerset, Essex & Suffolk and was a keen golfer.   He will be missed by many in the Chess world.”

The following position has been quoted in several books, and can be found online as a great example of a back row mate: 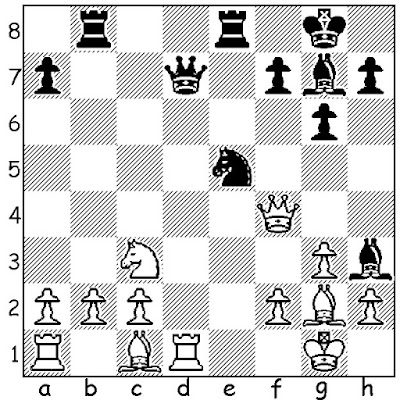 Peter’s attacking style can be seen to good effect in the following correspondence game from 1972 (Peter was White):

Peter’s well-stocked bookstall featured at many East Anglian events.   His diligence in carefully packing away every single book in the correct box caused some anxiety for local caretakers, as well as congress organisers who wanted to get home after a tiring weekend!

Peter last played a league game in March 2014.   His deteriorating eyesight and general infirmity meant that he could no longer play serious chess.

The funeral will take place at Weeley Crematorium at 14.00 on Monday 18 January.

There will be no more articles until 6 January (off to the West Country).