The Suffolk Under 160 team faced Hertfordshire this morning at the Turner Hall, Newmarket, losing narrowly by 7½ points to 8½.   However, in the afternoon, Suffolk beat Norfolk quite convincingly, by 9 points to 7.   This scoreline could, and should, have been better, but two of the last games to finish were drawn, with Suffolk players missing the wins.

As anticipated, the Cambridgeshire team was very strong, with more than half their team graded over 150.   By comparison, Suffolk and Norfolk had only three 150+ players, whilst Herts had two.   Cambridgeshire won both their matches.

This is the current league table:

Of the Suffolk players, Andrew Donnelly and Martin Tomes won both games, whilst those on 1½ points included Phil Hutchings, Alan Watkins and Bob Jones.

Martin Tomes (White) reached the following position after 20 moves in his afternoon game.   Black has just played d5, forking bishop and knight.   In fact White is winning easily and there are a number of good moves.   But Martin found the most spectacular move, causing Black to resign immediately: 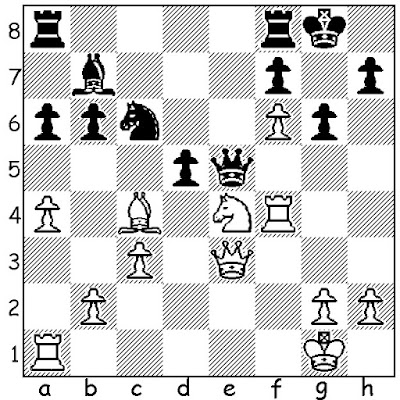