Here’s a game between John McAllister (Manningtree B) and Steve Lovell (Bury St Edmunds A), played this week.   It features the Marshall Attack in the Ruy Lopez, and contains an attractive Zugzwang finish.

Some comments on the opening first.   In the Marshall Attack, after 14… Qh3, White normally plays 15. Be3 or Re4.   15. Bxd5 is not considered favourable for White.   After 16. Bg4, taking on d5 is again unsatisfactory, as Black will play 17… Rad8 and although White would be two pawns ahead, he is hopelessly undeveloped.   Games in this line have usually resulted in wins for Black.

In the game, 18. Be3 is clearly losing (Bf4 is better), but it shows how easy it is for White to go wrong in the Marshall. It’s the better ‘booked’ player who generally wins.

After the queens and rooks have been exchanged, it should be a simple win for Black, with bishop against Black’s two extra pawns.   White’s 40. f5 is the final nail in his coffin, allowing easy access for Black’s king to penetrate to g5. 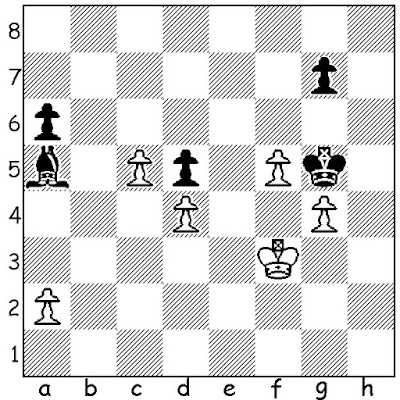 In the position above, with Black to play, White can resign.   Black plays 43… Bc7, taking control of the diagonal and preventing White’s king from accessing g3.   After a couple more moves (c6 and a4), White does resign, because he is in Zugzwang and will lose both his kingside pawns.