Alan Merry travelled to Telford in Shropshire last weekend to play in the Open section of the FIDE-Rated Shropshire Congress.

The event attracted a strong field, which included five Grandmasters, three IMs and three FMs.   Predictably, the five GMs finished in joint first place on four points each, with none having lost a single game (all recorded two draws).

Seventh seed Alan was on his own on 3½ points, finishing in sixth place.   His best result was in the final round, when he ignored the obvious charms of French IM Sophie Milliet (right)) to record a draw.   Alan was a little lucky to survive.   In the position below Sophie (Black) could have won the exchange with …Bf2 (there are other good moves too), but she went all passive with …Be6, and followed up with several other sub-optimal moves.   Alan failed to gain any rating points (he lost 2), so remains 26 points short of the elusive IM title. 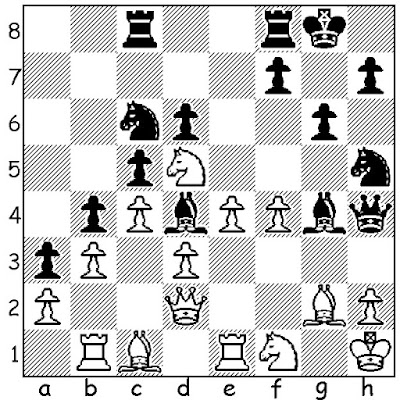 Also playing, in the Major (u160) section, was former Suffolk junior Anita Somton.   She scored 3½ points, including wins against a 153 and a 155.   Her grading performance for the four rounds she played (she took a bye in Round 1) was 167.   It surely won’t be long before 11-year old Anita is playing regularly in Open sections.

One thought on “Shropshire Congress report”