Andrew Donnelly, who plays for Sudbury in Suffolk League Division 2 and for Bury St Edmunds in the Bury Area League, reached the position below on Wednesday in a match against Cambridge City’s Ben Tarlow (155).   Andrew (Black, to play) was two pieces ahead but his king is misplaced, his bishop is pinned and the rook on h8 is useless, at least for the time being.   There is also potential for a White mate on d8 or e8. 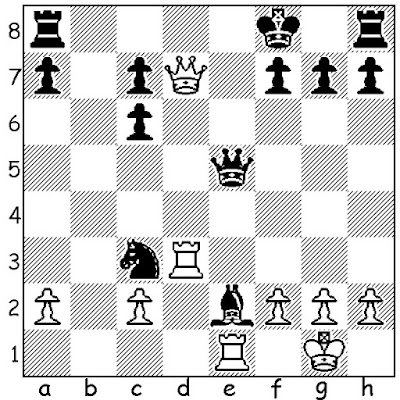 Study the position for a few minutes and decide what move you, as Black, would make.   Andrew chose a move which won very quickly, but not because it was the best move; Ben followed up by a move that lost immediately.

Andrew played … Bg4, attacking the White queen.   According to the computer, this is about the 10th best move!   Ben then played Qd8+??, and after … Rxd8, Rxd8+   Ke7, White resigned as the rook on d8 is en prise after White takes the Black queen.

The computer gives … Qf6 as the best move.   Did you find it?

Andrew’s own comments on this position are as follows:

“I’ve looked at this long and hard as I did whilst playing.   The position is complex with multiple threats from both sides.   From my perspective all I could see was queen takes on c6 threatening the rook on a8 and also threatening the knight on c3 which is already being attacked by the rook on d3.   It also attacks the e8 square potentially leading to a mate.   My rook on h8 is out of the game and looks like easy pickings if there is a check on the back rank.   Couple this with the threat of the rook coming to e3, threatening both the queen and e8 and the bishop on e2 and still attacking the knight on d3, I am in meltdown mode.   I looked at bringing the knight back to d5 to stop the rook coming to e3 but that surely loses to queen takes c6, rook d8, queen c5 check, king g8, and then pawn c4!   All I could think of at the time was bishop to g4 and exchange to a rook and knight with pawns v a rook and pawns.   A relatively simple win.

Now with a computer on board and no human pressure, queen to f6 tells us that I keep the two piece advantage and have a +7.1 advantage.   I never even looked at this but human pressure works both ways.   With my attempt to simplify down to a +2.8 advantage, I threaten the back rank mate if the queen takes the bishop.   An obvious bluff but my opponent being human sees the vulnerable rook on h8 and checks on d8, thinking that after Queen checks on d8, rook takes back, rook takes check, king moves to e7, and rook takes queen check on e5, he can pick up the h8 rook but of course I can take the rook on e8, game over.

Again I would emphasise that I looked at this long and hard and my opponent was not some patzer; he is a good player who despite being a couple of pieces down had a real chance of winning the game, (see my other preferred move of knight d5??).   I suppose my point is that had I made the best computer move, the game could have continued for many more moves; playing a more human move finished it two moves later!”

11 thoughts on “Find the best move”