The Suffolk under 160 team, weakened by a number of forced absences, played Norfolk this morning and newcomers Hertfordshire this afternoon, at Turner Hall in Newmarket.

The full results can be viewed on the Results website.

The average grade of the Suffolk team was just over 138.  This compares to recent years when we have achieved an average of over 145. Many thanks to those on Boards 12 to 16, who filled in so admirably.   Between them they scored a highly creditable 50%.

In the morning match, against Norfolk, we were told that Board 16 would be defaulted, but in addition, their Board 5 failed to turn up.   So we were winning 2 – 0 before we started! Their remaining 14 boards averaged 141.4, three points per board more than us.  But Suffolk still managed to win 7½ – 6½ on these boards, giving an overall score of 9½ – 6½.

The afternoon match pitted Suffolk against Hertfordshire, playing in the EACU u160s for the first time.   They brought a strong team, which averaged 147.4, a full nine points per board better than Suffolk.  They should have won convincingly, but only managed to do so by 9½ – 6½.

If anyone who played had a game worthy of publication, please send it to me.   In the meantime, you can view my win in the afternoon on the Games page.

The next pair of matches, against Cambridgeshire and Norfolk, take place on Sunday 6 January.  If anyone is unable to play, please let me know.

Rob Harden has sent me his win in the morning against Jim McAvoy from Norfolk. Here’s his fine finish. This is the position after Black’s 20…Bd7: 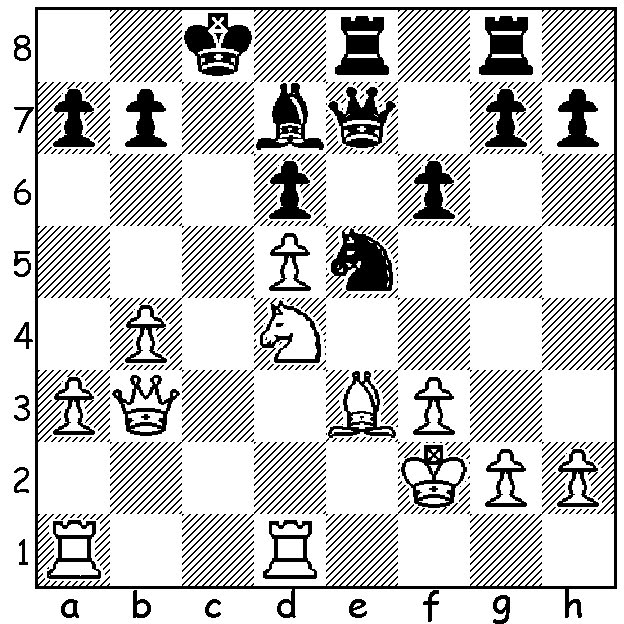