How many people know the correct way of promoting a pawn?   We all know that when a pawn is advanced to the eighth rank, it is exchanged for another piece of the same colour (other than a king, of course).   But can you change your mind as to which piece you wish to promote to?   Suppose you push the pawn to the back rank and pick up a queen.   Just as you’re about to place it on the promotion square, you realise that your opponent would be able to checkmate you.   You are allowed to change your mind and swap the queen for another piece (a knight for example may help you save the game), provided the queen didn’t touch the promotion square.   If it did, tough, it’s too late to change your mind (FIDE Rule 4.4d).

What else is important to remember in pawn promotion?   The move is ‘made’ when the new piece is released (Rule 4.6c).   There’s a difference between a move being ‘made’ and ‘completed’.   The latter only occurs when the clock has been pressed.

If a piece is not available, then you may stop the clocks to call the arbiter in order to locate a suitable piece (Rule 6.12b).   Using an upturned rook as a queen can be dangerous in tournament play, as your opponent may insist that it’s still a rook!   In league games, it’s generally accepted that an upturned rook is a queen, but you should make sure your opponent knows it’s intended to be a queen, and accepts that it is.

It’s not considered good practice to place the queen on the promotion square without first promoting the pawn, although that technique is often seen in quickplay finishes.

You can promote to any piece, regardless of whether that piece has already been taken.   That means you can have more than one queen, or more than two knights.   In fact in theory you could have nine queens!   Promotion to anything other than a queen is known as ‘under-promotion’.

In the following position, how many mates in one (for White) can you find? 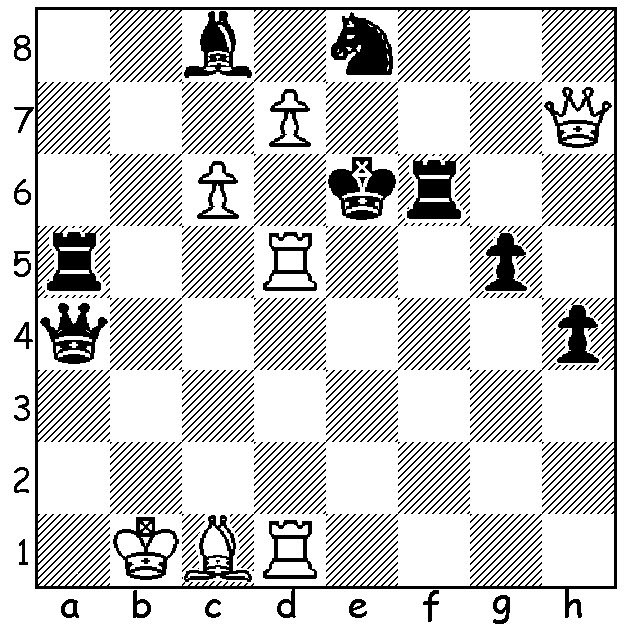