The first results of the season in Suffolk League Division 1 have seen a couple of upsets, with the top two Ipswich teams both losing.   Last season’s Champions Ipswich A went down 1½-2½ to a resurgent Manningtree, whilst newly-promoted Bury St Edmunds B managed to beat Ipswich B by a similar margin.

In this latter match, played on Tuesday in Ipswich, Bury’s Board 1 Chris Davison faced Martin Fogg.   With the match score level at 1½ points each, both players were running desperately short of time.   With less than a minute remaining, Martin (Black) made a fatal error in the following position: 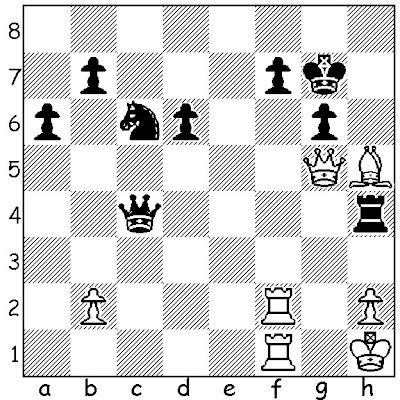 If, instead of … Qe4+, Black had played … Rxh5, the position might have been survivable, although after 41. Qf6+, followed by 42. Qxf7+ forcing off the queens, his scattered pawns would have made it difficult for Black to hold on for the draw.